West Virginia’s peak fire season came to a close. Out West, it was just getting started

Hot, dry conditions are expected to fuel risks of a brutal fire season. The U.S. Drought Monitor reports that 92% of western states are experiencing some level of drought, and 48% of the region is suffering “extreme or exceptional drought condition.”

The West Virginia Division of Forestry (WVDOF) is ready to pitch in and help when called.

“The western states are already getting busy with fires,” said Jeremy Jones, WVDOF deputy state fire supervisor. “We have completed our trainings and we will have a crew available for western fire duties in the next few weeks.”

Protecting the state from wildfire

West Virginia native Jones grew up hunting and fishing in Clay County, which developed his love of the outdoors. His family was active in logging, which gave him an appreciation of forest management. After joining the state Division of Forestry in 2003, Jones was called out to help fight a wildfire for the first time. He has been fighting them ever since.

“Once you get smoke in your veins, you’re hooked,” he said.

The WVDOF is responsible for protecting all non-federal land and personal property in the state from wildfire. Fire duties come with the job for every WVDOF service forester. The agency operates three primary programs to carry out that mission: West Virginia takes part in a cooperative agreement with state forestry agencies and the U.S. Forest Service to help each other with fire suppression when needed. WVDOF crews were deployed to Michigan in 2018, Oregon in 2019 and Colorado in 2020.

“The western states usually need out-of-state assistance because their fires are generally bigger than in the east,” said Jones. “Our fire seasons are in fall and spring; the western states’ fire season is in summer. This allows West Virginia to send our resources out of state during the summer months because we are green and usually do not have many fires then.”

WVDOF typically deploys a fire crew of 20 firefighters on a 14-day assignment. The crews handle whatever task is needed to control the fires, such as digging or cutting fire lines, conducting mop-up duties, aerial suppression or burnout operations. Burnout aims to stop a fire’s spread by removing fuel – anything combustible — by scraping vegetation down to bare soil and other tactics.

The Pine Gulch fire in Colorado was ignited by a lightning strike on July 31, 2020. The wildfire quickly spread through the drought-stricken grasses, brush and trees. The steep terrain made getting firefighting resources in place difficult. Crews from across the nation – including West Virginia – arrived to lend a hand. By mid-August, high winds whipped the blaze into even greater fury, burning more than 30,000 acres overnight.

The West Virginia foresters worked on the Pine Gulch fire for two weeks. Because of COVID-19 pandemic-related restrictions, the state fielded a suppression module of 10 people instead of the usual crew of 20.

“They did everything from digging fire lines and cutting trees. They protected structures and handled water pumps and hose lays,” said Jones. “They’ve did just about anything the fire would need.”

By early September, with the fire over 80% contained, the West Virginia team returned from deployment. The Pine Gulch fire consumed 139,000 acres, setting a grim record as the largest wildfire in Colorado history.

Fires on the home front

Wildfires present a menace here at home in West Virginia as well. From Jan. 1 through June 30, WVDOF recorded 550 fires – a jump of 48% compared to the same period in 2020.

Wildfire devastation does not stop when flames are extinguished. Wildfires damage surviving trees in the forest, often leaving them more vulnerable to diseases and insects. The land is exposed to erosion. The loss is suffered by people who rely on the forest for their incomes and by wildlife that depend on it for food and shelter.

The West Virginia State Forest Action Plan 2020 reports that people cause more than 99% of all wildfires in the state. The single biggest ignition source is debris burning.

To reduce the risk of debris fires that escape and turn into wildfires, West Virginia instituted a spring fire season (March 1 to May 31) and fall fire season (Oct. 1 to Dec. 31). During these seasons, outdoor burning of debris is prohibited from 7 a.m. to 5 p.m.

“In my position I get to travel around and attend meetings with other states that surround West Virginia,” said Jones. “West Virginia has very limited resources in comparison. The challenge is to upgrade our resources, such as bulldozers, to meet the suppression needs to protect our forests. It always makes me proud of what our agency accomplishes.” 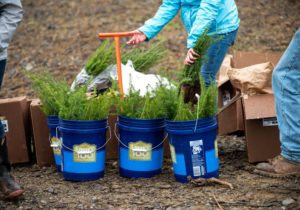 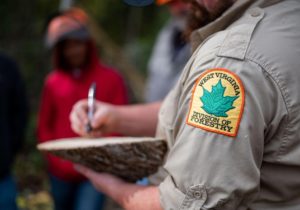